When I picture the "American Dream", I don't see a house, I see a neighborhood 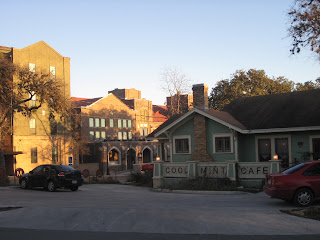 This is really great writing and distills the reasons why I live in East Point, Georgia. It has the potential to be like South Austin and San Marcos, but it's not there yet. However, we have a metro train, sidewalks, old porched bungalows and economic diversity. However, I've noticed the streets are more segregated. There are nice streets and not-so nice streets. I live on a not-so nice street, but have shared a pizza w/ my neighbors on the nice streets. We were both there eating pizza to raise money to support the schools. If only, East Point would have more commerce and life. Publix (a grocery store) has said our area doesn't meet its education criteria and thus, will not open a store.

Bluegrass Pundit said...
This comment has been removed by the author.
7:16 AM

i am very impressed with ur blog, please kindly add my newly created blog as below:

Thanks for an excellent article! I appreciate your insights and agree with what you wrote. new jersey cleaning services

Sounds very interesting! I will check this out! krk realty

If you like handmade shoes Portuguese take this opportunity to invite you to visit my blog.

Thank you for your attention.

I would like to exchange the picture-buttons to your curious blog. If approved, install anywhere in your blog the code of my button and tell me about it. Write in the commentary, for example, to this article - "Gorbachev: Putin will not be "fooled" Russian imitation of democracy" ( http://russia-xxi.blogspot.com/2012/04/blog-post_7226.html ), the code of your button, or to my e-mail. Code of my button I can post to you, if approved. I immediately set this code in my blog.

Obviously, sodding is much more expensive yet it is the one means to make sure that your grass takes root as well as flourishes into a remarkable lawn. Hum TV Dramas, ARY Dramas, Pakistani Talk Shows, Dramas Online, Drama Online, Urdu Columns, ARY Dramas And Urdu News